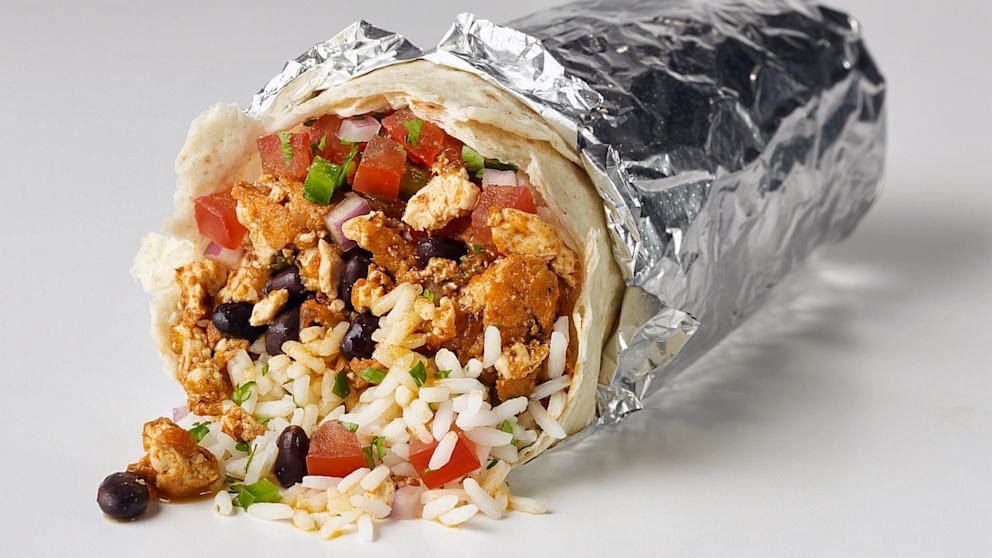 To me, there is no greater expression of intimacy, at least in San Francisco, than knowing someone's
favorite burrito order by heart. If you don't understand what I mean by that, you obviously don't live in a city like mine, where taquerias are almost as (and sometimes more) prevalent than Starbucks. Because taquerias are so ubiquitous here in the Bay Area, I always know my feelings are getting serious when I find I have memorized a significant other's burrito order.

And here, because I know you're just dying to read about it, is the Reader's Digest version of my romantic history: the men I loved and the burritos they ate.

The first boy I ever seriously dated ("serious" of course being a relative term in high school) always ordered a chicken burrito with nothing but rice and pinto beans. He also made fun of the taqueria I liked, preferring instead to go to the gringo chain that had the nerve to include burrito-eating instructions on their paper bags. I was perhaps, not the coolest girlfriend when I was seventeen (I cried a lot and was a terrible driver) , but even then I think I knew on some level that I could never coexist with his boring, generic burritos. It turned out that he was unable to coexist with my bad driving and hormonal crying fits, so the end was inevitable.

A few years later, I spent a summer living in Boston, where I was attending to college. Several times a week I would pick up burritos from Anna's Taqueria, pretty much the only decent taqueria in all of Massachusetts, and a six-pack of Sam Adams Summer Brew on my way home from work and meet up with Mr. Summer 2003. We would climb up to the tar-covered roof of my Allston apartment, eat burritos, drink beer, and watch the sunset in the smoldering humid night air. It's still one of my absolute favorite memories. His burrito was usually a Super Grilled Chicken. Being super, it incorporates many more of the flavors that a taqueria has to offer--beans, rice, cheese, guacamole, sour cream and of course, grilled chicken. It was obvious to me from the beginning that he was a better fit than Mr. High School, but the burrito definitely confirmed it. Unfortunately, he moved to Paris to explore Gauloises, Victor Hugo, and the art of drunk-dialing one's American ex-girlfriend.

Mr. Post-College ordered a different kind of burrito every time we went to a taqueria, which, of course, I don't condemn, but it was indicative of his fickle, mind-changing personality. He couldn't make a decision about anything, including whether or not he liked me, so that, of course, didn't work out.

Mr. Early Adulthood shared my love of burritos, and perhaps even transcended it. He ate (and I believe still eats) at least 3 or 4 burritos per week. He always ordered the same thing: Super-veggie burrito with black beans, lettuce, hot sauce, cilantro, and onions, hold the sour cream. I happen to totally disagree with the whole lettuce thing, as I think it's a filler and you should save room for the good stuff, but it made him happy. While he wasn't so great with chivalry or anything traditional, he knew the value of showing up at my apartment unexpectedly with my exact burrito order. In the months since we've broken up, there are still certain taquerias around the Bay Area that give me pangs of sadness when I remember our visits there.

Love, like a burrito, is a layered thing. Our layers are made up of our life experiences and also our upbringings (my father, for example, loves ground beef burritos from Taco Bell--where the hell is that supposed to leave me?). Finding our perfect match is a difficult process, and, while I'm not advocating practicing solely burrito-based dating, do pay attention to the burritos--both your own and your partner's--because you may find that they hold more information than you expected.

Gabi I am so glad you have a blog! I loved your burrito theory and hope you know you gave me a love for Sonoma Taco Shop; I visit every time I'm in town. And by the way, I can't think of a better person to be sharing food recipes than you; you have a way of making something taste AMAZING but you always made it with love! Hope you're doing well!