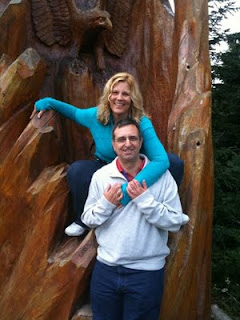 Thirty-one years ago today, Lawrence (Larry) Moskowitz, originally of Los Angeles, California, married Louise (Ouisue) Packard, of Hillsborough. The two met while both were employees of Matthew Bender Legal Publishing. He, having recently finished law school at Boalt Hall at UC Berkeley, was working as a legal writer and she, freshly graduated from Scripps College, a copy editor (it should be noted that she has continued correcting him ever since).

It was love at first sight...for him. She was dating a few other people at the time, and so it took him much effort (specifically: home-cooked dinners, one of which involved something called "taco casserole," much reciting of Shakespearean sonnets over the phone and one extremely slick denim suit, which he would later claim was merely a jacket, though his children would know the truth--it was a full on suit) to win her heart. Quickly Ouisue realized that he was the best, sweetest, smartest and funniest man she had ever met and they became a solid item and eventually set a wedding date.

Their wedding was a beautiful, meaningful and almost entirely pale peach-colored affair. The bride wore an ivory gown with balloon sleeves. The groom, a very funny Abe Lincoln-esque beard. The rabbi spoke of the wife's duty to obey her husband. Ouisue refused to do that specifically, but nevertheless, the two were wed. They honeymooned on Molokai, the least-expensive to visit of the Hawaiian islands, which they would discover twenty years later on a subsequent trip to be because mainlanders aren't particularly welcome there. While young and poor, however, Ouisue and Larry did not notice this.

They had two children, a girl and a boy. Parenting, they would find was not always easy. Their daughter behaved somewhat unpleasantly from ages fourteen to seventeen and their son, while in junior high school, developed an inexplicable fixation on Charlie Sheen, naming all of the family animals after the Major League star. Ouisue and Larry persevered, however, managing to parent their children while continuing to advance in their respective careers (Ouisue would earn a Ph.D. and start her own thriving private psychotherapy practice, while Larry would become a partner in a major Sonoma County law firm and also seriously improve his golf game). Their family would not be perfect, but it would be very, very happy.

And even now, as their children are grown, Ouisue and Larry continue to love and guide them, as indicated by the strong presences they maintain on their children's Facebook walls, as well as the happy and well-adjusted mental states of their children. The Moskowitz-Packards love one another with whole hearts and it's palpable. Theirs is one of those rare nuclear families. They know they need only to look around to see how lucky they are.

Happy Anniversary, Mom and Dad. I love you very much.
Posted by GLM at 7:32 PM

Congratulations to your parents! You raised the most wonderful friend a girl could ask for. Sorry we kept you up all night after drinking coffee milkshakes!

Gabi--That's a beautiful post. Yes, you and your brother are fortunate to have the parents you have. Your mother is amazing and your father is one of the finest men we know. The rest of the extended family is thankful for your wonderful, fun, and loving family. We love you!

Surprise your spouse or significant 700-651 PDF questions other with a personalized anniversary gift that shows how well you know and adore them. Custom-made jewelry, personalized wall art and photo frames that commemorate the special day you met or married, are just some of our great anniversary day gift ideas.
‎