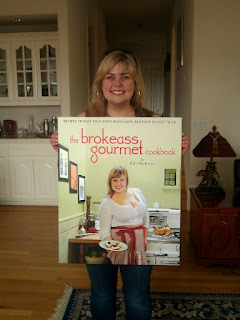 Exactly one month from today, my first book comes out. A year-and-a-half of writing, recipe testing, re-testing and editing like my reputation depended on it (it kind of did) went into it, and on May 8th, 2012, the fruits of my efforts will finally be ripe for the picking. It's beyond thrilling. And, I can't believe it's actually happening. Literally.
Though my publication date is nearing, the reality of my impending authorship has yet to sink in. The logical, cognizant me knows that I am being published because I have worked hard and am good at what I do, but a meaner, more critical voice in the back of my head has been rearing her ugly little self more and more often lately, magnifying my secret beliefs that I don't deserve this. That I'm a fake. That my every success thus far has been the result of some kind of fluke.
Yesterday, perhaps sensing this (consciously or unconsciously), Jeremy and Holly gave me the most incredible gift: a poster-sized canvas of the cover of my book. I was blown away--such a thoughtful, loving gesture.
I brought it home and removed it from its protective plastic wrapping, thinking of where to hang it. I brought it to the kitchen and held it up above the little table where I write write out recipes, but it just felt wrong. The living room was already too full of art, none of which I wanted to take down. Finally, I decided on a corner of my bedroom wall, next to the door. I took some measurements, hammered nails into the wall and hung it up.
I stepped back to admire my handiwork and suddenly felt the tears begin to well. There it was, larger than life; there was no ignoring it as it stared back at me, daring me to own everything it meant.
And I still don't believe it--in fact, I probably won't until I actually hold the book in my hands, and even then, I suspect I'll need to check the spine, just to be sure. But I will say that every time I pass by the wall next to my bedroom door, I feel that mean, critical voice getting just a tiny bit quieter.
Posted by GLM at 5:48 PM

lovely - I will visit often!